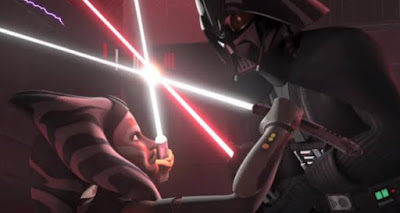 Star Wars Rebels featurette explores
Ahsoka Tano and Darth Vader’s history
As we await the big showdown between the former master and apprentice, a new featurette for Star Wars Rebels has arrived online entitled ‘Ahsoka Tano and Darth Vader: The Rise and Fall of a Friendship’, which explores the history of the two characters in Star Wars: The Clone Wars, through to their impending confrontation in Rebels.
Posted by anim8trix at 12:00 AM