Movie Trailer for manga 'Blade of the Immortal' 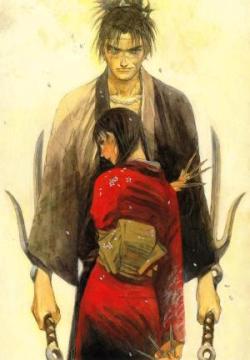 BLADE of the IMMORTAL
(Live-Action Motion Picture)
Blade of the Immortal (無限の住人) is an upcoming Japanese jidaigeki action film directed by Takashi Miike, starring Takuya Kimura and Hana Sugisaki and based on the manga series of the same name by Hiroaki Samura. It is scheduled for release in Japan by Warner Bros. Pictures on April 29, 2017.

Blade of the Immortal follows the deeds of Manji, a skilled samurai who has a decisive advantage: no wound can kill him, except for a rare poison. In the past, his criminal actions led to the death of 100 other samurai (including his sister's husband). He becomes immortal at the hand of an 800-year-old nun named Yaobikuni, and is compelled by the death of his sister to accept the quest that will end his agelessness. He has vowed to make amends by killing 1000 evil men, and until he does Manji will be kept alive by "sacred bloodworms" (血仙蟲 kessen-chū?), remarkable creatures that allow him to survive nearly any injury and reattach severed limbs even after hours of separation. They work by sacrificing themselves to seal the wound - they're worms that were bred to be as close in their chemical and physical make-up to humans as you can get without being human. They cannot handle regrowth on a large scale, but, for example, can reattach a severed limb or seal a hole in the brain. 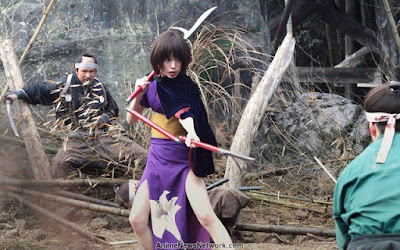 In addition, another group calling itself the Mugai-ryū has emerged, in opposition to the Ittō-ryū. Its true leadership and motives are initially a mystery, but its methods (any tactics that leads to victory) resemble those of the Ittō-ryū. They try to enlist Manji's help as they seem to want the same thing. Eventually Manji joins but quickly pulls out after he finds out a member, Shira, is way too sadistic for his tastes. After a while Manji finally discovers that the Mugai-ryū work for the government. They are all death row inmates who are allowed to live only if they serve the shogunate. While Manji and Shira quickly grow to hate each other, after Shira runs off, Manji remains on friendly terms with the other members of the group.
Posted by anim8trix at 1:00 PM