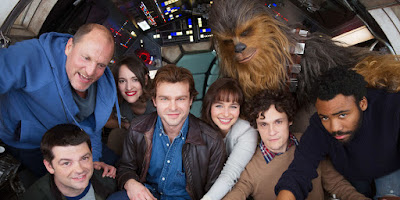 HAN SOLO PREQUEL
[Source: SyfyWire] Work is officially underway on Disney's new Han Solo prequel, and we have a shot of the cast hanging out in the Millennium Falcon to prove it.

The spinoff project will focus on the early days of Han and Chewbacca in the years before Star Wars: A New Hope, and will also feature their early meetings with Han's pal Lando Calrissian.

Little is known about the plot, though Woody Harrelson will apparently be playing Han's mentor, while Emilia Clarke will be the female lead (possibly a love interest) and Phoebe Waller-Bridge might be playing a female droid. Story-wise, they've kept it all under wraps for now.