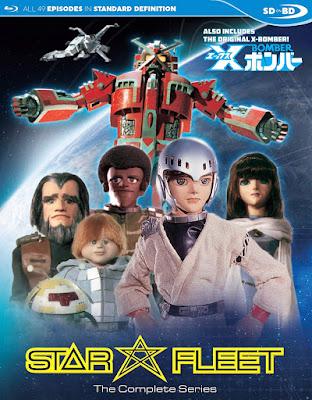 𝕊𝕋𝔸ℝ ✩ 𝔽𝕃𝔼𝔼𝕋
We've uploaded all 24 episodes in high quality, enjoy them! X-Bomber was renamed Star Fleet and dubbed by English speaking actors for broadcast in the United Kingdom on ITV. The show was broadcast there on Saturday mornings, first airing on October 23, 1982, the day before Star Wars aired for the first time on British television. Due to its broadcast slot, the advertisements shown before, during and after each episode frequently included children's Public Information Films. The series was also broadcast as such on first-run syndication in the United States.

Drawing heavily on diverse influences such as Star Wars, Japanese Anime and Gerry Anderson's various "Supermarionation" series, the show ran for twenty-four half-hour episodes (twenty-five in Japan - the eighteenth episode, titled Bloody Mary's Promotion, was not included in the English version, as it consisted mainly of flashbacks). The English version's theme song was composed by Paul Bliss,[5] and was later covered by Queen member Brian May and Van Halen guitarist Eddie Van Halen. This was released under the name "Star Fleet Project".

The screenplay was adapted for English by Michael Sloan, who in later years would create the popular TV series The Master and The Equalizer.

Actress Denise Bryer ("Commander Makara") and editor Tony Lenny both went on to collaborate with Gerry Anderson and Christopher Burr making another memorable sci-fi series, Terrahawks.
▶ Watch the First Episode
Posted by anim8trix at 12:00 AM