Chadwick Boseman Has Died at Age 43 CHADWICK BOSEMAN
[November 29, 1976 - August 28, 2020]
Black Panther Actor Has Died of Cancer
[Source: Yahoo! News] Chadwick Boseman, who reigned onscreen as Marvel’s noble Black Panther, has died of cancer at age 43, his family announced Friday.
The actor died at his Los Angeles home with his wife and family by his side.

In a statement released on his Twitter page, Boseman’s family revealed the actor was diagnosed with colon cancer four years ago. He never made his diagnosis public, even after photos of the gaunt-looking actor appeared on social media. 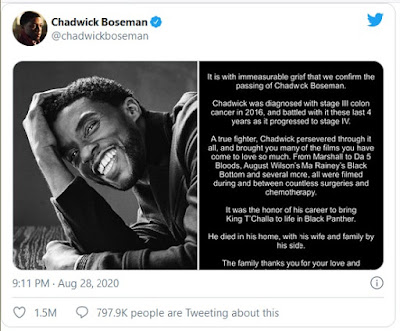 “A true fighter, Chadwick persevered through it all, and brought you many of the films you have come to love so much,” his family’s statement read. “From Marshall to Da 5 Bloods, August Wilson’s Ma Rainey’s Black Bottom and several more — all were filmed during and between countless surgeries and chemotherapy. It was the honor of his career to bring King T’Challa to life in Black Panther.”
Boseman, who shared a Screen Actors Guild Award for Best Ensemble for Black Panther, credited Denzel Washington for his start in acting; Washington paid for Boseman's college tuition.

While he was best known for playing T’Challa in the Marvel Cinematic Universe installments Captain America: Civil War, Black Panther, Avengers: Infinity War and Avengers: Endgame, Boseman was equally at home in prestige films. He carved out a niche playing Black icons like Jackie Robinson (42), James Brown (Get on Up) and Thurgood Marshall (Marshall). His most recent role was in Spike Lee’s Netflix release Da 5 Bloods earlier this year.