When VR and Real Worlds Collide... 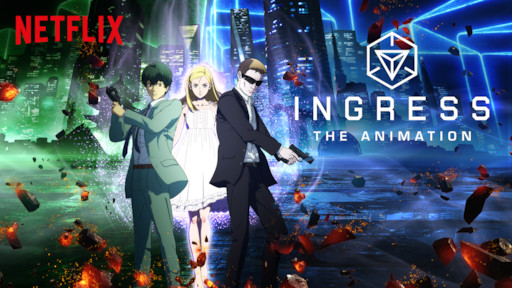 I  N  G  R  E  S  S
THE ANIMATION SERIES on NETFLIX
The story follows special police investigator Makoto, who has the power to read the memories of objects he touches. While investigating a laboratory explosion that was researching an unknown substance called "Exotic Matter" (XM), he touches the ring of a woman who was the sole survivor of the explosion and sees a horrifying vision that embroils him in a massive conspiracy.
▶ Watch the Trailer

A special investigator employed by the Metropolitan Police Force, Makoto is gifted with psychometry, which allows him to read the memories of objects he touches.

Sarah Coppola (サラ コッポラ, Sara Koppora)
Voiced by: Reina Ueda[2] (Japanese); Michelle Ruff[3] (English)
The sole survivor of an explosion at a research lab that was studying the substance XM. Sarah has lost her memories.

Jack Norman (ジャック ノーマン, Jakku Nōman)
Voiced by: Shigeo Kiyama[2] (Japanese); Crispin Freeman[3] (English)
A former mercenary who is following Sarah. Jack has the ability called "Flash Forward" that allows him to see into the future.

Liu Tien Hua (劉 天華, Pinyin: Liú Tiānhuá)
Voiced by: Kousuke Toriumi[5] (Japanese); Mark Whitten[3] (English)
Head of security at the research lab where the explosion occurred, Liu has taken a particular interest in Makoto. He is revealed to be working with Brandt.