Animaniacs get Reanimated by Spielberg... 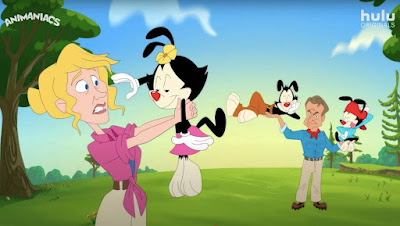 Animaniacs Return... Like Jurassic Park
[Source: Syfy] Ahead of the long-awaited Animaniacs return next month, the voice cast and producers popped by New York Comic Con to do what they do every night ... try to take over the world! Well, not exactly — NARF! They actually talked about the upcoming Hulu reboot, which executive producer Wellesley Wild (Family Guy) hopes will deliver on "some nostalgia, some comfort, and some silliness" in these difficult and uncertain times.
▶ Watch the Trailer
The Metaverse panel unveiled the very first footage from the show: a cold open inspired by the iconic scene in Jurassic Park where Alan Grant, Ellie Sattler, and Ian Malcolm see the Brachiosaurs for the very first time. Instead of freaking out over a herd of dinosaurs, however, the two paleontologists marvel at the resurrected Warner siblings: Yacko (Rob Paulsen), Wacko (Jess Harnell), and Dot (Tress MacNeille). Steven Spielberg, who returns as a producer, shows up as the John Hammond character. Never shy about delving into topical satire, the Animaniacs turns Donald Gennaro into a greedy Hulu executive. And since Spielberg is involved ("he's incredibly hands-on," according to Wild), they were even able to use some of John Williams' famous score.
Posted by anim8trix at 12:00 AM