Take a Virtual Tour of one of Star Trek's most memorable starships
▶ Take the Tour
USS Enterprise – NCC-1701-D (or Enterprise-D) is a 24th-century starship in the fictional Star Trek universe and the principal setting of the Star Trek: The Next Generation television series. The Enterprise-D also appears in the pilot episode of Star Trek: Deep Space Nine ("Emissary"), the series finale of Star Trek: Enterprise ("These Are the Voyages..."), and the movie Star Trek Generations.

The Enterprise-D is a Galaxy-class ship and the fifth Federation starship in the Star Trek universe to carry the name Enterprise. Enterprise-D is the flagship of Starfleet. The commanding officer is Captain Jean-Luc Picard for the majority of the ship's service. 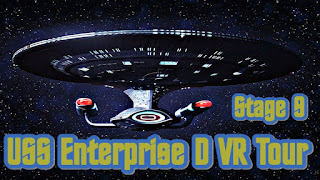