MEGAZONE 23 Part II
The Dezalg have returned with a new, horrible weapon and unleashed it on Megazone 23's defenses. Believing their salvation is also in new weapons, B.D. is again bent on breaking the EVE's final protection level.Full control of Megazone 23 would mean unfettered weapons development. Shogo, meanwhile, has tried to return to a 'normal' life; Hanging out with his biker gang, "Trash" and his girlfriend, Yui. But, his convictions about the Megazone's shadow government policies haven't changed and when EVE calls for his help, he discovers where the Garland bike has been hidden. It's showdown time for Shogo and B.D., Trash and the military, as well as the Dezalg and Megazone. However, EVE's final secret, A.D.A.M., may mean no one will survive. 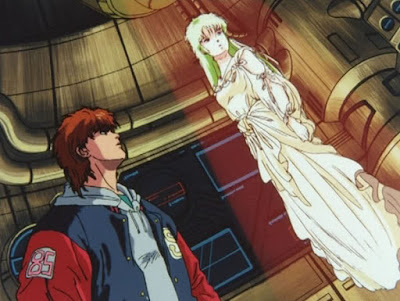 Megazone 23 Part II features one of the BEST end-of-the-world disaster scenes ever to appear in anime. And it's all put to music. This is how the world should end.
▶ You can Watch it Here
Posted by anim8trix at 12:00 AM