What Horrors Do They See on Those White Walls?

"White Walls"
Lovecraftian Horror Animated Short Film
"Imagine a man. He lives in a place where man's entire world is a white wall. It made some happy, some were sad. Some found it funny and others got angry. The man, though, was content. All he ever wanted, all he ever sought, was here. He knew nothing more."
▶ Watch the Short Film
This short film is inspired by the works of HP. Lovecraft. It's not based on any particular story but rather based around a lot of the ideas I find compelling about his work. I find Lovecraft's stories that center around the limits of human comprehension the most interesting. This film is about our ignorance of all that is beyond us, and how catching a glimpse of the terrifying enormity of the universe can drive one to madness. We all contently live in tiny little rooms staring at blank walls compared to the universe's vastness and its indifference.
by David James Armsby 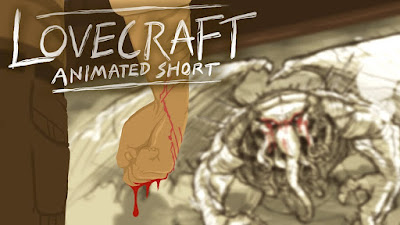