VINLAND SAGA
Plot Summary: Young Thorfinn grew up listening to the stories of old sailors that had traveled the ocean and reached the place of legend, Vinland. It's said to be warm and fertile, a place where there would be no need for fighting—not at all like the frozen village in Iceland where he was born, and certainly not like his current life as a mercenary. War is his home now. Though his father once told him, "You have no enemies, nobody does. There is nobody who it's okay to hurt," as he grew, Thorfinn knew that nothing was further from the truth. The war between England and the Danes grows worse with each passing year. Death has become commonplace, and the viking mercenaries are loving every moment of it. Allying with either side will cause a massive swing in the balance of power, and the vikings are happy to make names for themselves and take any spoils they earn along the way. Among the chaos, Thorfinn must take his revenge and kill Askeladd, the man who murdered his father. The only paradise for the vikings, it seems, is the era of war and death that rages on.
3:10 - 4:40    Lupin III: The First [CGI Movie] 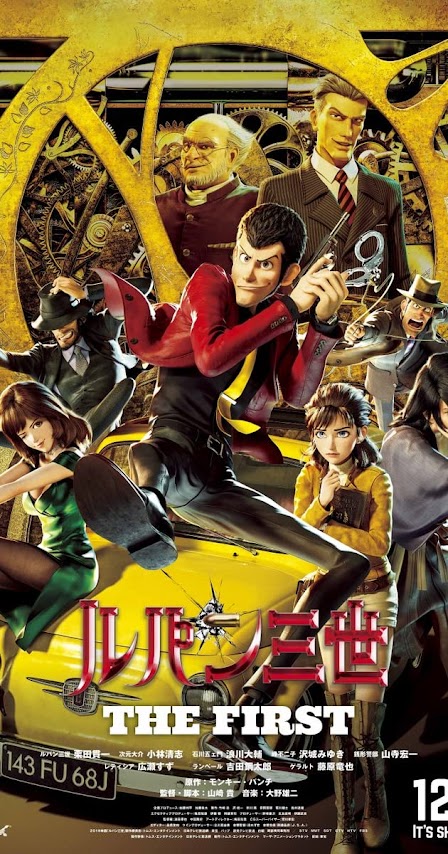 Lupin III: The First
Plot Summary: In Nazi-occupied France, archaeologist Professor Bresson entrusts his heavily trapped diary and an amulet containing the key to the book to his family. The diary is purported to be the guide to an immense treasure called the Eclipse, which a group of Nazis working for Ahnenerbe seeks to get into their hands. Bresson is killed by the arriving Germans; his family escapes, but is chased down by Ahnenerbe scientist Professor Lambert, and ends up in a car crash which only the infant daughter survives. Lambert steals the amulet, but is unable to find the diary, which was lost during the chase.

In the 1960s, the diary resurfaces during a memorial exhibition in Bresson's honor. Lupin III tries to steal the book, as his grandfather had unsuccessfully attempted before him, only to be foiled first by a pretty young woman disguised as a security guard, then by Fujiko, and to be arrested by Inspector Zenigata. On his way to prison, Lupin is sprung by his friends Jigen and Goemon and sneaks in to the home of the disguised security guard, a young prospective archeology student named Laetitia. He presents a medal identical to the one stolen by Lambert, which Lupin's grandfather had left him. Laetitia contacts Lambert, who has become her adoptive grandfather and on whose order she was supposed to steal the book in the first place. Lambert tells her to bring Lupin and the second amulet to him, in exchange for sending her to Boston University to study archeology.

In the meantime, Fujiko delivers the diary to a small group of Ahnenerbe fugitives still looking for the Eclipse, among them Lambert and their leader Gerard. However, Gerard quickly discovers Fujiko's plan to get the treasure and has her detained. Laetitia leads Lupin to Lambert's hideout, a customized transport plane, where they retrieve the book and the counterpart to Lupin's amulet. Lupin succeeds in disarming the trap and opens the diary, and the two learn that the Eclipse is a power generator left behind by a highly advanced lost civilisation and is hidden in the ruins of Teotihuacan, and knowing Laetitia has led him into a trap, Lupin willingly surrenders to Gerard and Lambert. When Lupin is locked up with Fujiko, the latter uses him as a diversion to escape on her own. Lupin sneaks back into the plane and eavesdrops on Gerard and Lambert, learning in the process that they are seeking none other than Adolf Hitler himself, who reportedly faked his death and escaped to South America during the fall of Berlin, and is now intending to use the Eclipse to resurrect the Third Reich.

When Laetitia, who has also overheard the conversation, confronts the two men, Gerard throws her out of the plane. Snatching the diary and the amulets back, Lupin jumps after her, and he and Laetitia are then rescued by Fujiko, Jigen and Goemon. Left stranded by their adversaries, Lupin summons Zenigata to his location and steals his Interpol helicopter. Zenigata manages to get back on board, and after learning of the stakes, he teams up with Lupin's gang and Laetitia to thwart the villains. During a stopover, Lupin reveals to Laetitia that he has deduced her to be Bresson's granddaughter and that Lambert adopted her only to get his hands on the diary and the Eclipse. He also discovers that his grandfather had actually helped Bresson to find the Eclipse, but afterwards booby-trapped the book for Bresson to prevent the Eclipse from falling into the wrong hands.

In the meantime, Gerard and Lambert find the Eclipse's hiding place, but are unable to proceed past its traps without the diary, forcing them to return to the place where they left Lupin. Exploiting their absence, Lupin's team makes it past the obstacles, but are then forced to discover that their enemies' retreat was merely a ruse to clear the path to the Eclipse. Lambert and Gerard activate the Eclipse, which carries them and Laetitia back to the surface, but Lupin's team intercepts them before they can escape, scuttling Lambert's plane. Lambert uses the Eclipse to get the plane to fly again, and activates a micro black hole to finish off Lupin's team; believing them dead, and drunk with power, he claims the device for himself and incinerates the diary. When he prepares to use the Eclipse to destroy Berlin, Gerard fights him; when Laetitia takes control of the device, Gerard shoots at her, but Lambert takes the bullet for her and dies. Right afterwards, Gerard receives the news that Hitler has been located and takes the Eclipse and Laetitia to him.

When Gerard arrives at the Ahnenerbe headquarters, he meets with Hitler and the two depart on the Eclipse to see its capabilities, and Laetitia is sent to be locked up. She finds herself in the company of Jigen, and discovers that Lupin and his gang beat Gerard first to the base with the help of Zenigata and Interpol, and Lupin is secretly disguised as Hitler upon her and Gerard's arrival. Back on the Eclipse, Lupin gives away his disguise and Gerard attacks him, but Lupin tampers with the Eclipse controls to release a micro black hole directly inside the Eclipse. Gerard is sucked into the hole and perishes while Lupin barely escapes with a gravity device he kept from the Teotihuacan ruins. After a fond but hasty good-bye to Laetitia - and gifting her with the gravity device along with enrollment into Boston as a farewell present - Lupin and his associates rush to escape Zenigata's ever-zealous attention, with Zenigata and his men bidding Laetitia farewell with a salute.