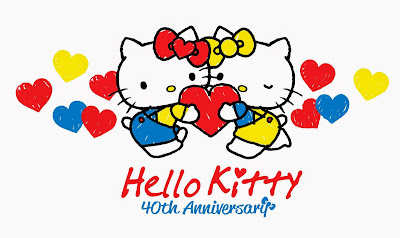 Hello Kitty Celebrates 40th Anniversary
When she came to life in 1974, she was a kitty without a name, sitting sideways in blue overalls and a big red bow, on a coin purse for Japanese girls. On Saturday, fans around the world celebrate the 40th anniversary of this global icon of "cute-cool." That is, Hello Kitty.

Only a handful of characters last so long, especially in Japan, where thousands come and go in a highly competitive market. Hello Kitty has the looks, and more.

"Characters must have certain qualities, like an oversized round face, short limbs and plump body," said economist Takuro Morinaga, an expert on popular culture. "Kitty follows the basics, yet she has a strong personality."

Innovative design and clever marketing also helped expand her fan base around the world, said Christine Yano, anthropologist and author of "Pink Globalization: Hello Kitty's Trek Across the Pacific."

Hello Kitty's company, Sanrio Co., which specializes in designing and making a wide range of products in the booming "cute" business, created her as a character 40 years ago.

According to Sanrio, her real name is Kitty White, born Nov. 1 — no year is given — in the London suburbs. The birthday date was chosen because it is the birthday of her original designer, Yuko Shimizu.

Sanrio strives to keep Hello Kitty ahead of the curve, factoring in social and fashion trends and collaborating with other popular characters and fashion brands. Her basic appearance hasn't changed much, but just about everything else constantly is. Yano said the philosophy of not resting is part of the character's success.
"That makes things very fresh, very new," she said in a telephone interview from Boston. "She is always the same but always different."
___
THE 70s: A SCHOOLGIRL STAPLE
Made up of just a few simple strokes — two dots for eyes, a tiny circle for a nose and no mouth — Hello Kitty was largely for little girls at the start. Her stationery became a staple gift for schoolgirls. Hello Kitty made her overseas debut in the United States in 1976 before heading to Europe and the rest of Asia. She posed piloting an airplane in 1978 for the opening of Tokyo's Narita International Airport, symbolizing her dream of going global.
___
THE 80s: KIDS STUFF NO MORE
Hello Kitty began shaking off her purely childish image and attracting adults. Her outfits and background shifted from bold red, blue and yellow to hues of pink and blue. A black and white Hello Kitty reflected a monotone boom led by Japanese fashion brand Comme des Garcons. Kitty's third and current designer Yuko Yamaguchi took the bold step of removing the black outline around the character. Hello Kitty decorated the popular items of the day, including pagers and hand-held game machines. 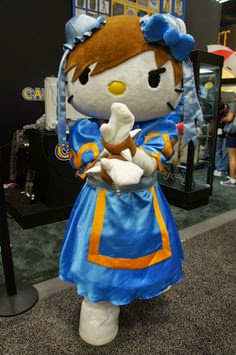 ___
THE 90s: LIKE MOTHER, LIKE DAUGHTER
Some of her original fans started having children, a potential second generation of fans. Sanrio Puroland, a theme park targeting families, opened in the Tokyo suburbs. Designer Yamaguchi created a baby Kitty in 1999 at the request of young mothers. "Kitty-lers," a new breed of grown-ups devoted to the character, became a national phenomenon. A Hello Kitty laptop went on sale, as did a portable karaoke machine amid a karaoke boom. "I'm her peer, and I've been her fan since kindergarten," said 40-year-old Yuko Ishikawa, who gave a big hug Thursday to Hello Kitty at Sanrio Puroland on a visit with her 3-year-old daughter, Hina. "Happy birthday!"
___
THE 2000s: THE COOL FACTOR
The growing worldwide popularity of Japanese animation and comics helped Hello Kitty become cool, not just cute — or "cute-cool" as Yano puts it. A new wink gave her greater semantic presence, she said. "It can be taken straight, or ironically, or it can be taken humorously." Sanrio reached out to fans of different fashion tastes, from girly to street and designer brands. In 2008 Hello Kitty donned a Dior collection in Vogue magazine. She also co-branded with Diesel, A Bathing Ape, Undercover, Reebok and Vans, as well as cosmetics makers Crabtree and Evelyn and MAC. 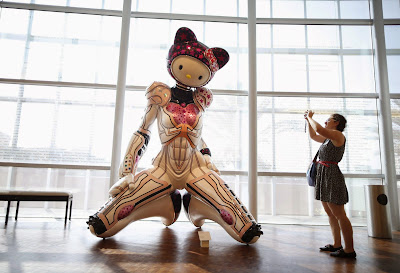 ___
THE FUTURE: LADY GAGA, SWAROVSKI, WHAT'S NEXT?
Hello Kitty is featured on about 50,000 items in some 130 countries. Lady Gaga has performed in Hello Kitty costumes, and rock band Kiss produced T-shirts last year featuring Hello Kitty in its trademark-Kiss makeup and costumes. A sitting Kitty decorated with 14,000 Swarovski stones sells for 476,280 yen ($470) in Japan. Taiwan's EVA Air launched a Kitty-inspired Airbus A330-300 flight between Taipei and Sapporo in 2011, and Kitty-themed luxury spas have opened in Bangkok and Dubai.

Her future? There will be some ups and downs ahead, Yano says, but "I think it has a presence, a long-lasting presence."


Watch Hello Kitty in English
Posted by anim8trix at 12:00 AM