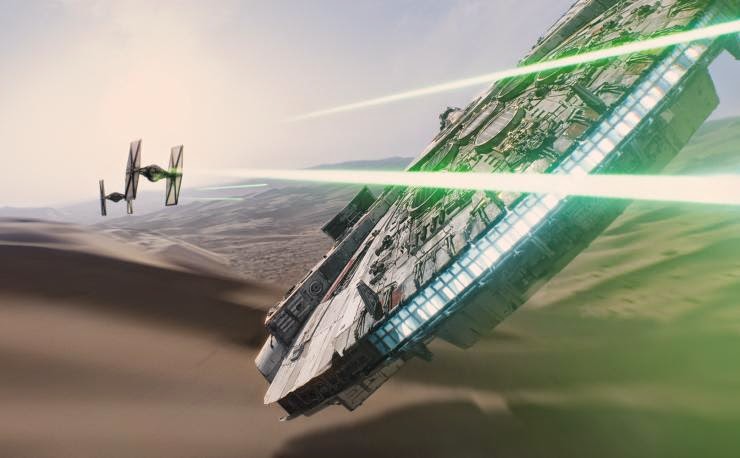 STAR WARS: EPISODE VII
The Force Awakens
[Source: blastr.com] You can finally watch the first trailer for our much-anticipated return to a galaxy far, far away.

This is a moment some fans have been waiting for ever since October 2012, when the Walt Disney Company bought Lucasfilm and announced that a new trilogy of Star Wars films would move forward at the studio. In the more than two years since we've seen the film find a director, two screenwriters, a cast of young stars and old friends, and lots and lots of rumors, but in all that time we couldn't get what we really wanted: a peek at the footage.

News broke earlier this week that the first trailer for Star Wars: The Force Awakens would arrive in select theaters today, and indeed many Star Wars faithful are probably watching it on the big screen right now. For the rest of us, though, the trailer has also dropped online, and though the footage still doesn't give us many hints in the way of plot, it does offer plenty of stirring visuals, including good looks at each of the film's three new leads -- John Boyega, Daisy Ridley and Oscar Isaac -- in action. It's got a desert planet, a snow planet, a new lightsaber design, a peek at a villain, an adorable new droid, X-wings and stormtroopers.

And oh yeah, there's the triumphant return of the Millennium Falcon to John Williams' soaring score.
Posted by anim8trix at 12:00 AM