Disney's Big Hero 6 Gets Anime Short
by Comedian Tekken in Japan
[Source: AnimeNewsNetwork] Disney is introducing its latest animated film, Big Hero 6, in Japan with a video animated by Tekken, a comedian famous for emotional flip-book-style anime shorts. The short features the song "Story" by popular singer AI.
The adventure story revolves around Hiro, a 14-year-old boy who lost his dear brother Tadashi in a mysterious accident, and Baymax, a personal healthcare companion robot developed by Tadashi. The story is set in San Fransokyo, a fictional city that combines the imagery of San Francisco and Tokyo.

Inspired by the film, Tekken created this promotional video about the bond between the two brothers, and the literal and figurative healing Baymax gives Hiro.

The movie's producer Roy Conli said that he loves Tekken's flip-book animation. Conli discussed working with Tekken several times, and he lauded the final work as truly marvelous. Big Hero 6's directors Don Hall and Chris Williams said they were quite taken by the short, and called it very "cute and kawaii."

Big Hero 6 opened in North America on November 7, and it will open in Japan on December 20. Artist Haruki Ueno (Phi-Brain: Saigo no Puzzle, EXILE Monogatari) launched a manga adaptation in Kodansha's Magazine Special in August, and Yen Press will publish the manga in North America. (The film itself is loosely inspired by Marvel's comics of the same name, and Hall and Williams have openly cited anime and manga as major influences on their movie.) 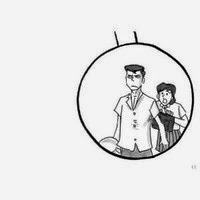 Tekken gained famed with Pendulum, a manga "flip book" animation with over 1,620 images he drew by hand. The short depicts the story of a married couple through the years. The animation attracted over 3 million views on YouTube since its initial in release on a Japanese variety show in 2012.

After watching the video that same year, British rock group MUSE used Pendulum as the official music video for their song "Exogenesis: Symphony Part 3 (Redemption). Panelist at the 42nd Japan Cartoonist Awards held by the Japan Cartoonists Association of Manga Creators honored Tekken for last May for Pendulum, lauding the short as "a work that shows us the new potential of manga." The short is now inspiring a live-action film with Manami Konishi (Steamboy), Itsuji Itao (Cromartie High: The Movie), and Naoko Ken (Mirai Shōnen Conan Tokubetsu Hen-Kyodaiki Gigant no Fukkatsu).
Posted by anim8trix at 12:00 AM