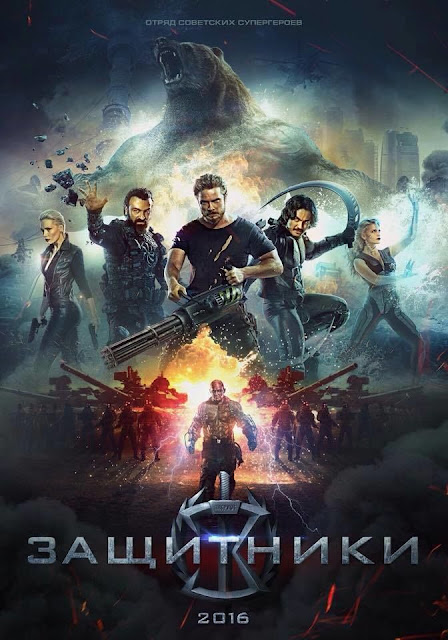 First full trailer for Guardians
[Source: blastr] We first heard about Russian superhero movie Guardians about a year ago, and since then we’ve seen two very cool teaser trailers and a bunch of awesome character posters that got a bunch of us excited for the film. But today, we finally have the first full trailer.

The movie set to be released in Mother Russia on Feb. 23, 2017, stars Anton Pampushniy as Arsus (the bear-man dude guy), Sanzhar Madiev as Khan, Sebastien Sisak as Ler, Alina Lanina as Xenia, Valeria Shkirando as Latina, Vyacheslav Razbegaev as Dolgov, and Stanislav Shirin as Kuratov. Sure, the trailer's in Russian, but there are (at times bad) English subtitles embedded in the video below, so you can at least have some (at times hilarious) idea of what’s being said.

Here’s a new extended synopsis:
Set during the Cold War, a secret organization named “Patriot” gathered a group of Soviet superheroes, altering and augmenting the DNA of four individuals, in order to defend the homeland from supernatural threats.

The group includes representatives of the different nationalities of the Soviet Union, which each one of them have long been hiding their true identity. In hard times, they settled down to business and gather to defend their homeland.

There’s no release date for North America yet -- that is if Guardians gets to be released here at all -- but I'm living in hope it will, because it looks like a lot of insane fun. What do you guys think of the trailer?