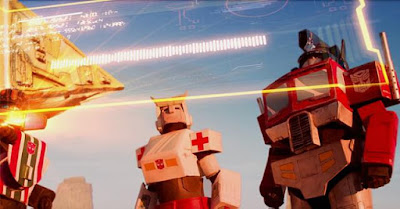 GENERATION 1 HERO
As Paramount Pictures and Hasbro plot out their expanded “Transformers” cinematic universe, they would be wise to take 13 minutes and watch this amazing fan film, which manages to channel all of the charm and fun of the original animated series. On virtually no budget!

Called “Generation 1 Hero,” it’s directed by Lior Molcho and stars members of Arizona Autobots, a group of Transformers cosplayers who create their own costumes. “Y’know, it was a lot of fun having them punch each other,” Molcho said in a behind-the-scenes video. “It’s a boy’s dream come true, y’know: giant robots punching each other! This is pretty awesome!”

That enthusiasm for the property — and for practical effects — shines through in the short, which will transport you back to the 1980s series.
Posted by anim8trix at 12:00 AM