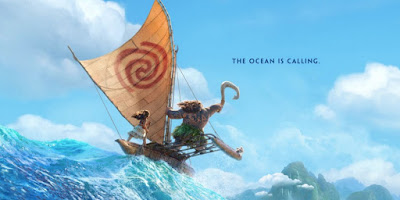 [Source: ScreenRant] Walt Disney Animation studio’s latest offering Moana is set for release in just a few months time. From the directors of Aladdin and The Little Mermaid, this new tale follows a brave sixteen year-old wannabe wayfinder on a life-affirming quest across the ocean.

Fourteen year old newcomer Auli’i Cravalho has been cast in her debut role as the voice of Moana, acting alongside Dwayne Johnson (Central Intelligence) as her friend and idol, the demigod Maui. Casting news and character details of the other roles in this feature have been kept under wraps until now, as the studio have just unveiled a range of character images and synopsis, and revealed the stars who’s voices will bring this assortment of lovable characters to life.

Moana will be helmed by Disney veterans Ron Clements and John Musker and will be the pair’s first mostly computer animated feature as this technique is more ideal for achieving the stunning water texture required for the many ocean based scenes. The film also boasts a stellar screenwriting team including Taika Waititi (What We Do In The Shadows) and Jared Bush (Zootopia). Prior to some new images from the upcoming film revealed at SDCC 16 last week, a teaser trailer showcasing Johnson’s apparently hilarious turn as Maui has been released, along with a charming teaser introducing Moana as a toddler, discovering her special relationship with the ocean.
The eclectic assortment of human, animal and legendary characters (as reported by Coming Soon) appear to be the convivial and entertaining Disney fare that fans have come to expect. The collection includes Moana’s family members: Gramma Tala, her mother Sina and her father Chief Tui voiced by Rachel House (Hunt For The Wilderpeople), singer Nicole Scherzinger and Temuera Morrison (Star Wars: Episode II Attack of the Clones).

Alongside Oceania’s tribespeople, Moana will meet Tamatoa – a bling loving 50ft crab from the realm of monsters voiced by Jemaine Clement (The BFG) and Heihei – an intellectually challenged rooster along for the adventure, voiced by Alan Tudyk (Zootopia). Other characters the studio has released images of are a group of coconut pirates called the Kakamora, and Moana’s puppy-esque pet pig Pua.

Musker commented on the talent cast for Moana:

“Our assembled voice cast for this film is beyond our wildest dreams….. We are so fortunate to have this group of talented actors, many from Oceania, breathing life into their characters.”

“We are so thankful to have found such extraordinary people who not only capture the voices of these characters, they elevate them in every way.”

Take a look at the characters below: