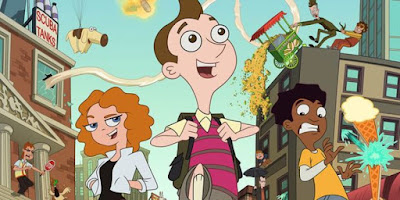 MILO  MURPHY'S  LAW
[Source: blastr] With everything from Guardians of the Galaxy to Star Wars: Rebels already on the schedule, Disney XD is quickly becoming a one-stop shop for sci-fi geek-friendly animated fare. Now, they’re expanding a bit to grab attention from music geeks, as well.

The network has debuted the first footage from the new animated series Milo Murphy’s Law, which stars parody music legend Weird Al Yankovic as the voice behind a quirky kid with bad luck that runs so deep it's genetic. Milo and his pals will spend each episode dealing with daily disasters (including some time travel!) and trying to have some fun in the process. It’s a cute pitch, and with Weird Al also contributing some original tunes, it could certainly be worth checking out.

Milo Murphy’s Law is set to premiere October 3 on Disney XD.
Posted by anim8trix at 12:00 AM