No Man's Sky is an action-adventure survival video game developed and published by the indie studio Hello Games for PlayStation 4 and Microsoft Windows. The game was released worldwide in August 2016.


No Man's Sky's gameplay is built on four pillars—exploration, survival, combat and trading—in which players are free to perform within the entirety of a procedurally generated deterministic open universe, which includes over 18 quintillion (1.8×1019) planets, many with their own set of flora and fauna. By exploring, players gain information about the planets that they can submit to the Atlas, a universal database that can be shared with other players of the game. Players get compensated in in-game currency every time new information is uploaded to The Atlas. Players also gain materials and blueprints to upgrade their character's equipment and purchase a variety of starships, allowing them to travel deeper into the center of the galaxy, survive on planets with hostile environments, interact in friendly or hostile manners to computer-controlled space-faring factions, or trade with other ships. Some activities, such as killing too many lifeforms or draining too many resources from planets, will draw the attention of patrolling robotic Sentinels that will attempt to kill the player-character. 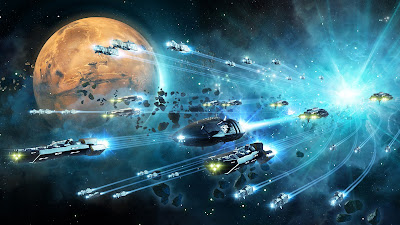 Players participate in a shared universe, with the ability to exchange planet coordinates with friends, though the game is also fully playable offline; this is enabled by the procedural generation system that assures players find the same planet with the same features, lifeforms, and other aspects once given the planet coordinates, requiring no further data to be stored or retrieved from game servers. Nearly all elements of the game are procedurally generated, including star systems, planets and their ecosystems, flora, fauna and their behavioral patterns, artificial structures, and alien factions and their spacecraft. The game's engine employs several deterministic algorithms such as parameterised mathematical equations that can mimic a wide range of geometry and structure found in nature. Art elements created by human artists are used and altered as well within these generation systems. The game's audio, including ambient sounds and its underlying soundtrack, also use procedural generation methods from base samples created by Paul Weir and the musical group 65daysofstatic. 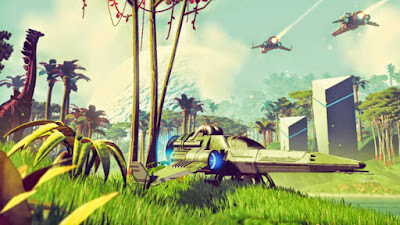 No Man's Sky represents Hello Games' vision of a broad, attention-getting game that they wanted to pursue while they secured their financial well being through the Joe Danger series of games. The game's original prototype was worked on by Hello Games' Sean Murray, and then expanded into a small four-person team prior to its first teaser in December 2013. About a dozen developers worked on the game leading up to its release, with Sony Interactive Entertainment providing promotional and marketing support. Sony formally announced the title during their press conference at the Electronic Entertainment Expo 2014, the first independently-developed game to be presented at the Expo's centrepiece events.

Inspired by the adventure and imagination that we love from classic science-fiction, No Man's Sky presents you with a galaxy to explore, filled with unique planets and lifeforms, and constant danger and action.

In No Man's Sky, every star is the light of a distant sun, each orbited by planets filled with life, and you can go to any of them you choose. Fly smoothly from deep space to planetary surfaces, with no loading screens, and no limits. In this infinite procedurally generated universe, you'll discover places and creatures that no other players have seen before - and perhaps never will again. 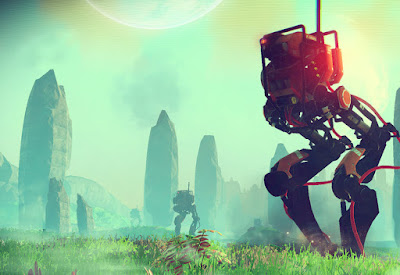 Embark on an epic voyage

At the centre of the galaxy lies a irresistible pulse which draws you on a journey towards it to learn the true nature of the cosmos. But, facing hostile creatures and fierce pirates, you'll know that death comes at a cost, and survival will be down to the choices you make over how you upgrade your ship, your weapon and suit.

Find your own destiny

Your voyage through No Man's Sky is up to you. Will you be a fighter, preying on the weak and taking their riches, or taking out pirates for their bounties? Power is yours if you upgrade your ship for speed and weaponry.

Or a trader? Find rich resources on forgotten worlds and exploit them for the highest prices. Invest in more cargo space and you'll reap huge rewards.

Or perhaps an explorer? Go beyond the known frontier and discover places and things that no one has ever seen before. Upgrade your engines to jump ever farther, and strengthen your suit for survival in toxic environments that would kill the unwary.

The galaxy is a living, breathing place. Trade convoys travel between stars, factions vie for territory, pirates hunt the unwary, and the police are ever watching. Every other player lives in the same galaxy, and you can choose to share your discoveries with them on a map that spans known space. Perhaps you will see the results of their actions as well as your own...
Posted by anim8trix at 12:00 AM