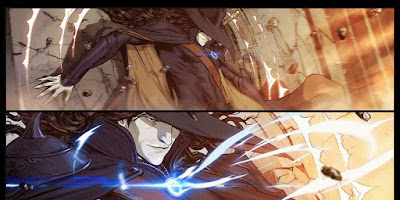 Vampire Hunter D
[Source: blastr] The Japanese saga Vampire Hunter D is getting a new lease on life as an animated TV series, plus a new comic. So, what’s the latest?


The folks at /Film caught up with Kurt Rauer and Scott McLean from Unified Pictures to discuss the initiative, which will launch as a new comic book series that will provide momentum for the first season of an animated TV series. A Kickstarter campaign raised $88,600 (and counting) to get the comic series off the ground, which will be based on the unpublished Kikuchi story Message From Cecile. If the momentum holds, it should carry them through the initial five-issue run.

Looking beyond the comic, Rauer said they also still plan to launch a one-hour dramatic animated series, with plans to produce 8-10 episodes per year. They’re mapping out enough material for seven seasons, so if they get it off the ground, it could run for a good long time. There’s no network involved at the moment, though they’re shopping it around. So, just give it time.

“Not yet. This is part of that creation process,” Rauer said. “So as we’re doing visual development for the comic, we’re also doing visual development under the hood for the series itself. So some of the work that you see as biz dev on the Kickstarter campaign, that’s being used to set our look and feel of pictures for the animation side of things. It’s sort of dual purpose.”

If you want to get in on the ground floor of the new comic series, the crowdfunding campaign is live for a few more days, so feel free to check it out.
Posted by anim8trix at 12:00 AM