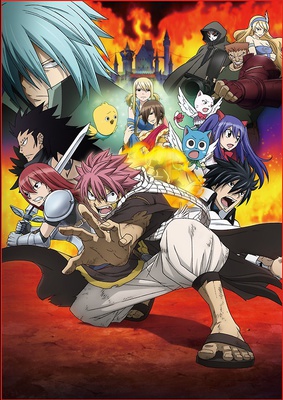 Follow Fairy Tail's dream team - Natsu, Gray, Erza, Lucy, Wendy, Happy, and Carla - as they lend a helping hand to a girl with little memory and a grudge against wizards. As they uncover clues about her mysterious past, a lunatic prince hatches a half-baked plan to sacrifice her in exchange for immortality. When the fool unleashes an ancient force, a raging war becomes the fiercest inferno Fairy Tail has ever faced. Can the guild with a heart of gold save the planet from a fiery finish?
Starring the Voice Talents of:
Original manga creator Hiro Mashima was in charge of story planning and visual design for the film's all-new plot, and he also drafted the guest character designs and image concept art.

The film opened in Japan last year, and Funimation will release the film in a Blu-ray Disc+DVD Combo Pack on December 10. The pack will include the Fairy Tail the Movie Prologue: "The First Morning" anime, trailers, and "clean" creditless opening and ending sequences.
Posted by anim8trix at 12:30 AM