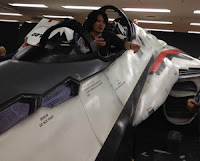 [Source: AnimeNewsNetwork] The official Facebook page for the MacrossWorld convention announced on Thursday that illustrator Hidetaka Tenjin will be attending the October 5 event in Torrance, California. The announcement follows the previous news that singer and voice actress Mari Iijima will return to the convention for another year.

Despite having no formal art training, Tenjin began garnering fans in college when he posted his Macross fan artwork on his personal website. That attracted the attention of the Macross creators — including the designer of the anime's Valkyries, Shoji Kawamori — and Tenjin began illustrating model kit boxes for not just Macross, but also Gundam, VOTOMS, Patlabor, and other mecha classics. He also illustrated games such as Gradius V and became the main artist for new art in Macross Chronicle and Space Battleship Yamato Fact File, the definitive resources for those two science-fiction series.

Eventually, he began working directly in anime as a visual and special effects artist, particulary for works from Kawamori's studio Satelight. His credits include Macross Zero, Macross Frontier, Hellsing Ultimate, Gundam Evolve, the Saint Seiya movie, and Genesis of Aquarion.

Iijima is known for playing Lynn Minmay in both the Japanese and English dub versions of The Super Dimension Fortress Macross science-fiction anime series. She also contributed songs to later Macross projects and had her own independent music career. Her debut album, Rosé, was produced by composer Ryuichi Sakamoto. In 2006, Iijima returned to Macross to reprise her role as Lynn Minmay in the English dub. In doing so, Iijima made history by becoming one of the first Japanese voice actresses to reprise a major role in the English dub of a Japanese anime. Iijima currently lives in Los Angeles.
Posted by anim8trix at 12:30 AM