‘The Legend of Korra’ Season 2 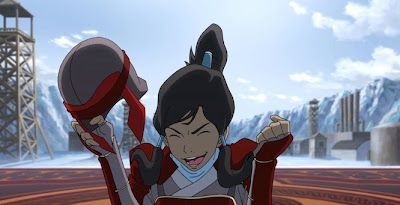 Though the official panel at San Diego Comic-Con revealed the news that The Legend of Korra season 2 (entitled ‘Book 2: Spirits’) would debut in September, no specific release date was announced at that time. The show’s first season officially aired from April through June of last year, and ever since, devoted fans have (sometimes literally) been waiting on the edge of their seats for the Legend of Korra season 2 release date.

The Legend of Korra season 2 promises not to disappoint. A trailer for the season was released at San Diego Comic-Con, and contains so many exciting elements (Desperate battles! Communion with past Avatars! Waterfall slides!) that it’s hard to decide which part makes us most excited.

Watch the new trailer for The Legend of Korra season 2 here:


The Legend of Korra season 2 will also introduce several intriguing new characters to Korra’s world. Fans will meet Korra’s extended family for the first time, which includes her imperious uncle Unalaq and impassive twin cousins Desna and Eska. In addition, a specially-designed flashback episode will introduce fans to Wan, the very first Avatar, who will be voiced by Steven Yuen of The Walking Dead.
Posted by anim8trix at 12:30 AM