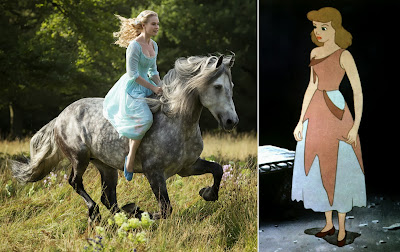 [Source: Yahoo! News] Here is our first look at Lily James as Cinderella!

Riding a horse while showing more skin than the classic 1950 animated character ever revealed, this new image of Rella is just the first indication of the changes that Disney has in store.

Disney states that the look, crafted by "Cinderella" director Kenneth Branagh, honors the tradition of the iconic princess while giving it a new spin of Branagh's own, according to a statement released on Monday.

Best known as Lady Rose MacClare on "Downton Abbey," James's Rella has flowing blonde hair and wears a dress that looks somewhat similar to the animated Cinderella's ball gown. Cinderella's outfit also shows off some ... wait for it ... cleavage! And no, the original Disney character didn't come close to showing as much.
Seen gamboling through a field on horseback, Cinderella looks to be a strong and capable horsewoman — an aspect of the character that hasn't been seen much of in the past. Overall, the image suggests that while this "Cinderella" will still be a period piece, it will give its leading character a more modern and independent streak than Cinderellas of yore. 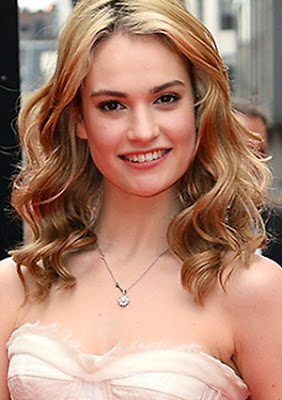 In spite of Cinderella's updates — which include a name change — Branagh plans to honor our favorite moments from the '50s animated feature. "It is impossible to think of Cinderella without thinking of Disney and the timeless images we’ve all grown up watching. And those classic moments are irresistible to a filmmaker," he says.

Matching the updated look, the first official synopsis included in Disney's statement reveals that Branagh and screenwriter Chris Weitz ("About A Boy" and "The Golden Compass") are giving the beloved fairy tale a few modernish twists. In their version, Cinderella begins the story as Ella. Her new name is actually a mean-spirited insult given to her by her Stepmother (played by Cate Blanchett), who turns her into a lowly servant after the death of her mother.

While riding through the woods, Ella meets a handsome stranger who she believes works at the nearby Royal Palace. It turns out, he's really the charming Prince (Richard Madden of "Game of Thrones"), which certainly puts a different spin on their romance. And when Ella is prevented from attending a ball at the Palace by her hard-hearted stepmother and ill-mannered sisters (Holliday Grainger and Sophie McShera), she's given some unexpected help by an elderly beggar woman (Helena Bonham Carter) — who turns out to be more than Ella could ever imagine. Can you say Fairy Godmother?