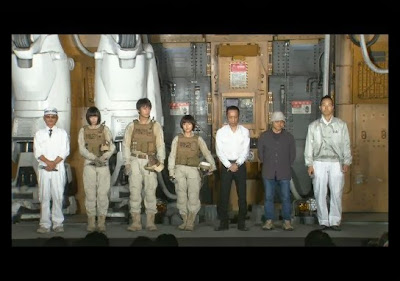 [Source: AnimeNewsNetwork] At a press conference, the stars appeared on the project's actual Chiba-area set in costume alongside an 8-meter-tall (about 26-foot-tall) Ingram robot. 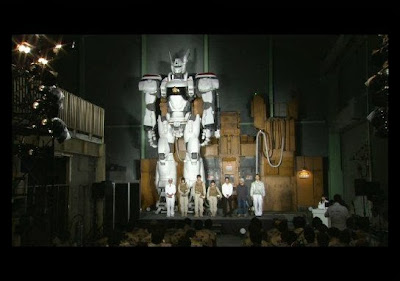 The Next Generation project is not a remake of the earlier Patlabor anime stories, but a completely new work. The story is set in Tokyo in 2013, and it represents the "third generation" of Patlabor.  The Tokyo Metropolitan Police has disbanded its Section 2 Division 1 of  police robots, and Section 2 Division 2 barely survived the budget cuts  due to the long recession. 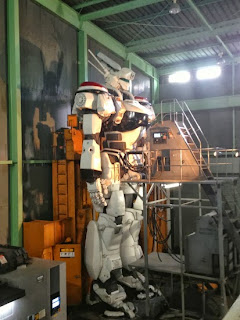 The project will begin with a seven-part series that distributor Shochiku will run in special theatrical engagements in Japan, starting next April. The seven parts are composed of an episode 0 (about 10 minutes long) and 12 full episodes (about 48 minutes long) helmed by the project's chief director Mamoru Oshii and other directors. Then, Oshii is directing and writing a feature-length film (about 100 minutes long) that will open in 2015. The title of the feature will be announced later.

The production is budgeted at 2 billion yen (US$20 million), and principal photography is running from June to the end of December. The two life-size Ingram robots were built at the cost of several tens of millions of yen (several hundred thousand US dollars).

Oshii commented that the seven-part series will have a "slapstick" ambience, while the feature film will be serious. Oshii and Kei Yamamura are writing the scripts for the series, and Kenji Kawai is returning to the franchise to compose the music for both the series and the feature film.

The production company Tohokushinsha Film Corporation announced at France's Japan Expo in July that Oshii is involved in next year's live-action project of HEADGEAR's Mobile Police Patlabor anime.
Posted by anim8trix at 12:30 AM