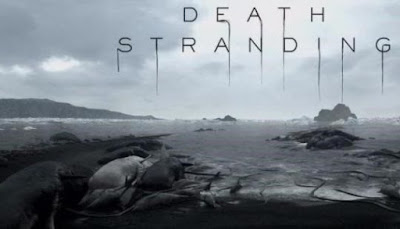 D E A T H   S T R A N D I N G
[Source: blastr] After his very public split from Konami, and the death of his high-profile Guillermo del Toro collaboration Silent Hills, Hideo Kojima is back in action with one of the strangest projects to hit E3.

The Metal Gear Solid creator chatted with Wired about his new project Death Stranding, which stars Walking Dead alum Norman Reedus. The actor was originally supposed to star in Silent Hills, and Kojima said he was attracted to using Reedus in this project because he became comfortable with the beloved zombie killer.

As for Death Stranding, the trailer showed a naked Reedus on a beach, along with a disappearing oil slick baby and some freaky crabs and whales. Apart from that … nothing really made all that much sense. Kojima told Wired he’s trying to break genres with the project, looking at the things that tie people together and push them apart.

Here’s an excerpt from his comments:

“You can see the crabs, the whales, all things, they all have these umbilical cables. Norman, as he stands up. It’s a very important part, this connection. That’s the keyword. What people are playing today in open-world action games, or linear action games, it will compare naturally to them. It will feel familiar. But after an hour or two of playing, you will start to feel something different, something new that you haven’t played. The story is about connections, what you call ‘strands’ in psychology—how people are connected...

There’s an author that I’m a huge fan of named Kōbō Abe. Among his work is a novel called The Rope. He mentions that the first tool that humanity invented was the stick, to keep away bad things. Right now, looking at today’s online games, you see a lot of sticks—pistols, weapons, things that are the equivalent of the first tool. Abe, in his novel, mentions that after the stick, mankind invented something that keeps things that are important close to you—the rope. In Death Stranding, there will be the equivalent of sticks. But also, I want to tie people together with the equivalent of ropes.”

The game looks to be one of the strangest tentpole releases in years, and it's great to see someone like Kojima take advantage of his success to try something truly unique.
Posted by anim8trix at 12:00 AM