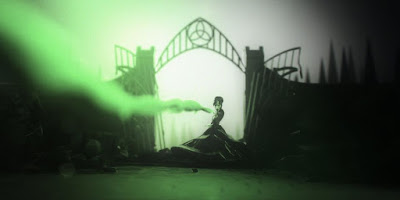 Origins of Ilvermorny School of Magic
[Source: blastr] Ahead of the premiere of Fantastic Beasts and Where to Find Them in November, J.K. Rowling has released a short story revealing the origins of the Ilvermorny School of Witchcraft and Wizardry featured in the Harry Potter movie prequel Fantastic Beasts and Where to Find Them, set in the Roaring '20s, decades before the story of the Boy Who Lived.

The new tale is also accompanied by a quiz that will sort out Harry Potter fans into the school’s houses (Horned Serpent, Pukwudgie, Tunderbird and Wampus -- such fun!) and by this gorgeous animated trailer that tells the tale of Ilvermorny’s founding by a young Irish woman named Isolt Sayre back in the 17th century.

Following the death of her parents, and after much suffering at the hands of her evil aunt, Isolt stole her magic wand and fled to the New World aboard the Mayflower disguised as a Muggle boy named Elias Story. While there, she discovers a whole new magical world and fantastical creatures.
Posted by anim8trix at 12:00 AM