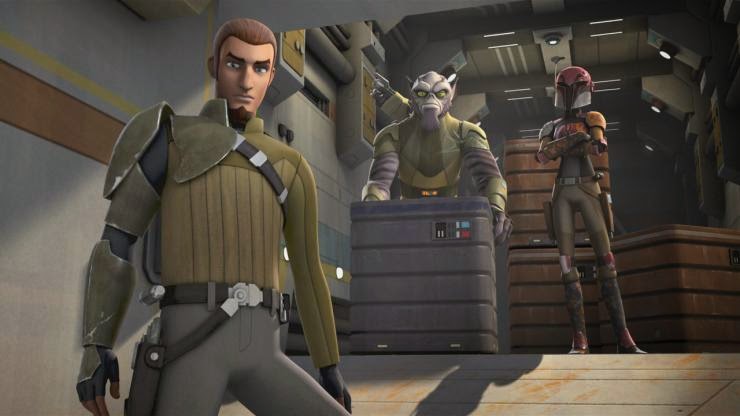 STAR WARS: REBELS
The Jedi have been wiped out and the Empire spreads tyranny through the galaxy. Hope runs thin. But on the small planet of Lothal a big change is looming. A group of rebels meet a 14-year-old con artist named Ezra and soon it's clear their destinies are linked. Aboard their ship, the Ghost, Ezra and the rebels embark on an adventure to ignite a rebellion and strike back against the Empire.


[Source: blastr.com] Though they haven’t shown off anything from Episode VII yet, Disney and Lucasfilm were out in force at San Diego Comic-Con to promote the new animated series Star Wars: Rebels.
Presenting the "true origin story"
of the Rebel Alliance
Executive producer Simon Kinberg opened up about the setting during the show’s panel, and explained how it will fit into the wider Star Wars canon. He also delved a bit deeper into the concept, laying the groundwork for the larger story they hope to tell with the Clone Wars replacement:

“There was a chapter before '[Star Wars: Episode IV A] New Hope' that was somewhat unexplored," says. "We wanted to create a show that was a precursor to the films. It's pre-'New Hope' and it's really the origin of the rebels. We also want to try some things that the movies haven't done yet…
This is the true origin story of the rebel alliance. This is about people that aren't a part of an alliance when the show starts. They're just rebels, four and then five and then more trying to fight back and claw back a little bit of territory that the Empire has taken over. We know one day, maybe after their lifetimes, they will win. But this is the very early days of the resistance.”

Along with the new, unexplored setting, executive producer Dave Filoni revealed they’ll be showing off some nifty new weapon designs. Among them? A spinning, double-edged lightsaber. That won’t be all, either, as Filoni promises they’re “always looking for new ways to design weaponry.”

Filoni also hinted at one reason the studio might’ve opted to drop Clone Wars for this new project, saying they’re telling a “side of things that doesn’t have anything to do with Luke.” Fair enough, and if they pull it off, it could open up an awesome new corner of the galaxy far, far away.

Of course, this being Comic-Con week, they also unveiled some nifty new footage. Along with the new trailer above, a new clip featuring an intense lightsaber battle between the Inquisitor (Jason Isaacs) and rebels Kanan (Freddie Prinze Jr.) and Ezra (Taylor Gray) is also available below:
Posted by anim8trix at 6:50 PM