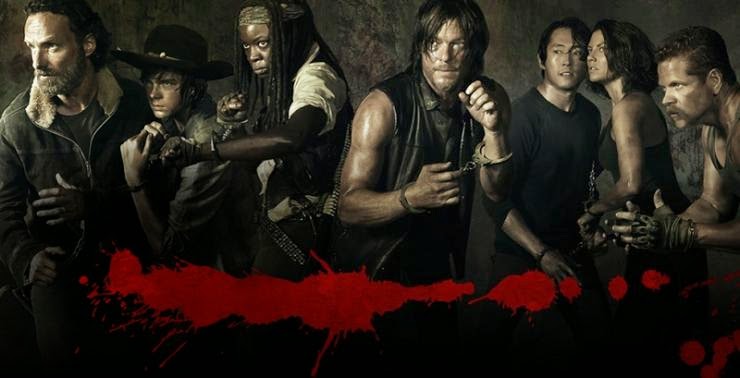 [Source: blastr.com] After last season's shocking cliffhanger, The Walking Dead's showing no signs of slowing down. At this point, we all know Terminus isn't the safe haven it claimed to be. After being locked in a boxcar like prisoners, the survivors will once again fight for their freedom and, more importantly, their lives.

We heard some scenes from the first episode were too intense and had to be cut.

Scott Gimple: Yes, they're seriously intense. It's funny, when I was scripting it I was talking to Greg [Nicotero], so I knew he was directing it. And it was really important to me that we just get started with it, and boy do we ... I will say the first six minutes, I'm very weirded out to think that families are going to be watching it. It is very very intense.

Gale Anne Hurd: On the Blu-ray the last line of season four was "You're screwing with the wrong people." And we actually get to use the line the way it was in the comic book, which is not OK for television. I suppose there's a possibility that some things that are inappropriate for a family audience could be on the DVD.

Where does season five pick up?

Scott Gimple: It's relatively soon after the last season ended.

What can you tell us about the people of Terminus?

Gale Anne Hurd: Clearly they've created their own community and they've survived. ... Anyone who's able to reassemble a community has to be very good at what they do, and everyone is working together. But there's some question that if you look very closely at the promo piece you might get a feeling that it's not all sweetness and light.

In the Comic-Con trailer it looks like the two groups strike up an uneasy alliance.

Robert Kirkman: They seem like bad people. ... It certainly doesn't seem like they're going to be striking up an easy alliance with these people. Whatever you see in the trailer, whatever is coming up in the show, it's definitely not going to be as clean-cut as it may appear in a brief thing. So there's definitely going to be a lot of nuance to what's taking place over the course of season five and a lot of things that you wouldn't expect.
Posted by anim8trix at 6:15 PM