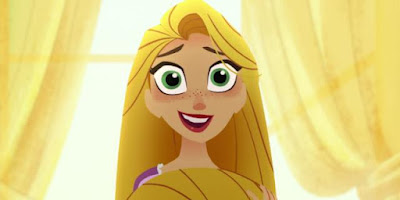 TANGLED: The SERIES
In the earliest days of Disney’s fairy tale films, the princesses didn’t have to do much besides look beautiful and get rescued. Starting with Beauty and the Beast in 1991, effort has been made to make those princesses more than just pretty. Belle was an intelligent reader who saved the Beast’s life in the end. Aladdin’s Jasmine refused to get married until she was in love. Mulan saved all of China with her wit and bravery. And in 2010, Rapunzel was as active in her own escape as Flynn Rider/Eugene, the thief who took her on adventures outside of the tower where she had lived all her life in Tangled.


Tangled took the familiar story of Rapunzel and turned it into an exciting adventure where both Rapunzel and Eugene were essentially equals. He was her guide to the outside world, but she frequently saved and protected him – from drowning, an angry pub full of rogues, and Mother Gothel, the woman she thought was her mother. At the end of the film, they both saved each other, with Rapunzel using the magic inside her to heal Eugene’s wounds, and Eugene cutting Rapunzel’s hair short so that Gothel wouldn’t try to keep the princess locked up anymore. The moment her hair was cut, it turned brown and the magic moved from her hair to her tears.


Well, Disney is not done with Tangled. A new series is coming to Disney Channel, called Tangled: The Series. Before that however, there will be a made-for-TV sequel. Watch the trailer for Tangled: Before Ever After.

The animation looks significantly different from the film, but that is not the only change. Magically, Rapunzel’s long blonde locks return. And this time, it appears as though no knife or scissors will be able to cut through it. This could make Rapunzel a target for those who would use her magic for their own purposes, as Mother Gothel did. Not to mention that 70 feet of hair is not all that easy to take care of.


Returning to voice Rapunzel and Eugene are Mandy Moore and Zachary Levi. Joining them is a new character, Cassandra, played by Broadway actress Eden Espinosa.


Tangled: Before Ever After will air on Disney Channel in March, with Tangled: The Series beginning soon after.
Posted by anim8trix at 12:00 AM