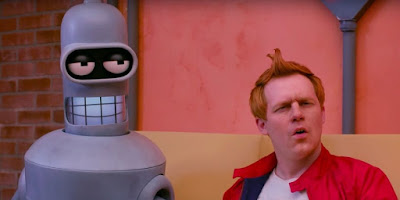 "WeirDlY ImAgInatIve"
A group of fans have been working on a live-action fan film based on Futurama — it’s taken about two years — but Fan-O-Rama has finally arrived. And it’s weird. So, so weird.


Matt Groening’s cult hit Futurama is one heck of a weird, surreal future world. In animation, it’s pretty easy to have a leading lady with one eye and a main character who is basically a giant lobster. In live action? Yeah, those visuals can get a little disturbing. But filmmaker Dan Lanigan and his team go all-in with the weirdness, and it’s one heck of a romp. Considering there's no new Futurama on the way, this is certainly a fun little diversion.


They loaded the short with a ton of Futurama in-jokes, so there’s a lot for fans to love. As weird as it all is, you can see the love for this franchise shine through the unsettling (but ambitious!) effects. They’ve re-created a lot of the familiar sets, and we absolutely adore the live-action Bender. Seriously, we want to hang out with that robot.

Check out a behind-the-scenes making-of clip:
Posted by anim8trix at 12:00 AM