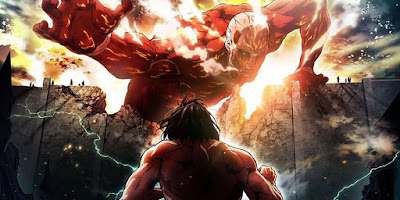 A T T A C K  on  T I T A N
FUNimation has unleashed the first exciting promo video for the second season of Attack on Titan. The animated series is based on Hajime Isayame’s highly successful Japanese manga series of the same name, which has spawned several animated adaptations, a two-part live-action film followed by a spin-off TV series, as well as a couple of videogames, just to name a few.

The story takes place in a world where humanity lives inside cities surrounded by colossal walls because big bad humanoid beings love to chomp down on humans. It follows the story of Eren Jaeger, Mikasa Ackermann and Armin Arlert, who have joined the Scout Regiment, a group of cadets who fight the good fight against the Titans.

The Attack on Titan: Season 2 promo (which is in Japanese with English subtitles) begins on familiar ground: A group of flesh-hungry Titans are walking toward humanity, and we learn that Wall Rose has been breached. Our young heroes will have their work cut out for them as they make a stunning discovery. The footage reveals the epic return of the Colossal Titan and we have a first look at the new Beast Titan (fans of the manga will be familiar with this one) and so. Much. More!
Posted by anim8trix at 12:00 AM