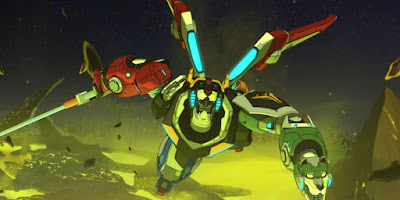 VOLTRON SEASON TWO
[Source: blastr] We’re about two weeks away from the second season premiere of Voltron: Legendary Defender, and an awesome new trailer has finally been unleashed.

Kicking off on Jan. 20, the rebooted DreamWorks animated series’ sophomore season will pick up after the epic battle that took place at the end of Season 1. Executive-produced by Joaquim Dos Santos (The Legend of Korra, Avatar) and Lauren Montgomery (The Legend of Korra), the show premiered in June of last year on Netflix and proved to be a solid hit with fans.

Season 2 will begin with the Paladins and Princess Allura scattered across the galaxy after their defeat and on the run from the evil Zarkon, with the trailer teasing that Team Voltron will encounter some new allies and villains (you can’t get one without the other) and explore new worlds along the way. What’s going to be interesting to see is how they will deal with the fact that Zarkon was also the Black Lion’s Paladin, and that he and Shiro are both linked to it. Here’s an official synopsis for Season 2:

Team Voltron has been scattered throughout the universe in the aftermath of a perilous battle with Zarkon, Haggar and the evil Galra Empire. Working to bring the lions back together to form Voltron again, the Paladins' plan to defeat the Galra once and for all takes them across the universe in search of new worlds and unexpected allies. Find out if their plot to take down Zarkon succeeds when Season 2 of DreamWorks Voltron Legendary Defender premieres on Netflix January 20, 2017.