New Trailer for 'The Mummy' Reboot 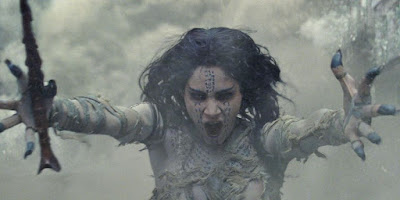 T H E   M U M M Y
Tom Cruise     Annabelle Wallis     Sofia Boutella
Universal Pictures is hard at work rebooting their monster movie universe with the monster mayhem kicking off in style with the reboot of The Mummy. After releasing a very exciting teaser a few days ago, they’ve now unleashed the full force of the first official trailer. As the poster says: Welcome to a new world of Gods and Monsters.

Cruise plays the role of Nick Morton, who faces off against a vengeful ancient Egyptian princess named Ahmanet, played by Star Trek Beyond’s Sofia Boutella (who looks amazing as a mummy, by the way. She must have done a lot of milk-bathing). The action-packed trailer below raises a lot more questions than it answers, especially regarding Cruise’s character (and if what I think happened to him really happened). Being a fan of Stephen Sommers' take on The Mummy, I wasn't so sure how I would like the reboot, but from the looks of it, it seems like we’re in for quite a thrill ride! So dig in, and unwrap the new Mummy trailer below.