9 Minute Trailer for 'The Great Wall' 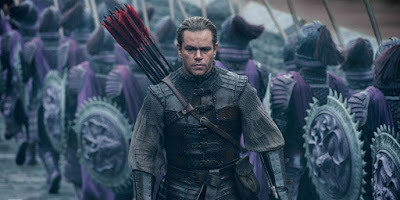 T H E   G R E A T   W A L L
[Source: blastr] Matt Damon is taking his action star cred overseas for the Chinese production The Great Wall, and a lengthy new trailer shows off all kinds of new footage from the fantasy epic.

The movie looks to be one of the most ambitious efforts ever mounted for a Chinese film (it’s the biggest film ever shot completely in China), and follows a group of heroes who make a “stand for humanity” on the Great Wall. It stars Damon, Jing Tian, Pedro Pascal, Willem Dafoe and Andy Lau. It’s being directed by Zhang Yimou (Hero, House of Flying Daggers). The new trailer clocks in at nine minutes in length, and shows off more of the epic scope and period setting for the fantasy-action epic.

Looking beyond the film itself, The Great Wall will be an interesting case study for how well a Chinese-led film can do in the global market (and whether it’s worthwhile to produce a film of this scope for a Chinese audience, as opposed to an American one). The Chinese film market has quickly become one of the biggest outside of the U.S. (ever wonder why blockbusters like Iron Man 3 now make a point to set a bit of the action overseas?), and The Great Wall looks to test just how big it is with a legit Hollywood movie star.