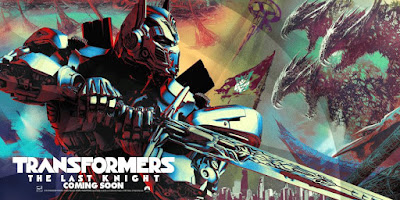 TLRAASNTS FKONRIMGEHRTS
Transformers: The Last Knight is not so much about the humans running around in the middle of this insanity. Yes, Mark Wahlberg is still kicking around firing a big gun, but it’s all about the robots. We get a voiceover setting up the themes of worlds colliding, and a new war brewing between flesh and metal, with fleeting shots of explosions and sweeping vistas. Bay has turned these Transformers movies into a sort of art form at this point, and he checks all the boxes, here. If you liked the past four films, you should dig this one.