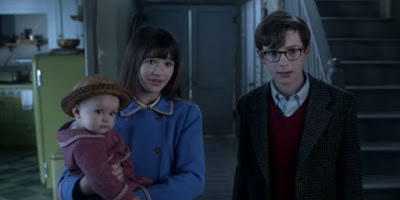 Sinister new trailer for Netflix's
Lemony Snicket's A Series of Unfortunate Events
[Source: blastr] Netflix is positively brimming with captivating new series and projects galore and this new trailer for its adaptation of Daniel Handler's Lemony Snicket's A Series of Unfortunte Events books operates in the same weird and wonderful realm of edgy fantasy snd sci-fi fare like the streaming network's Stranger Things, Sense8 and Black Mirror. Neil Patrick Harris has the opportunity to really stretch his comedic legs and acting range as the loathsome swindler and disguise artist Count Olaf with next month's sarcastic exploration of the darker angels of human nature. This second promo showcases the Baudelaire kids' dark upbringing, subversive humor and surreal landscape the twisted series explores, and has a certain Burtonesque quality that feels immediately absorbing. Especially tempting are the juicy cameos by Don Johnson and Joan Cusack!
Here's the official synopsis:
Based on the internationally best-selling series of books by Lemony Snicket (aka Daniel Handler) and starring Emmy and Tony Award winner Neil Patrick Harris, Lemony Snicket’s A Series of Unfortunate Events recounts the tragic tale of the Baudelaire orphans — Violet, Klaus, and Sunny – whose evil guardian Count Olaf will stop at nothing to get his hands on their inheritance. The siblings must outsmart Olaf at every turn, foiling his many devious plans and disguises, in order to discover clues to their parents’ mysterious death. The eight-episode series is a Netflix original production, executive produced by Emmy Award winner Barry Sonnenfeld and Daniel Handler, and also stars Patrick Warburton, Joan Cusack, Malina Weissman and Louis Hynes.
The full eight-episode season of Lemony Snicket’s A Series of Unfortunate Events rolls out Jan. 13th on Netflix.
Posted by anim8trix at 12:00 AM