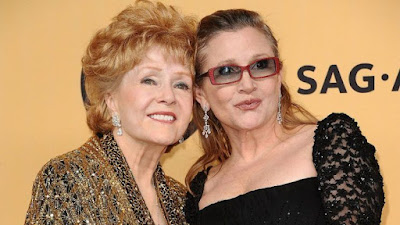 DEBBIE REYNOLDS
(April 1, 1932 – December 28, 2016)
[Source: Yahoo!News] Debbie Reynolds passes away just one day after her daughter, Carrie Fisher, dies of a heart attack. Debbie Reynolds, the indefatigable star of Singin’ in the Rain, who bounced back time and again on the strength of a career that spanned the golden age of the Hollywood musical to the new golden age of TV, died on Dec. 28 at the age of 84 in Los Angeles. Her death came just one day after she endured the cruelest blow possible, when her daughter, Star Wars actress and writer Carrie Fisher, died on Dec. 27 at age 60, following a heart attack.

“She’s now with Carrie and we’re all heartbroken,” her son, Todd Fisher, told the AP on Wednesday.
A onetime Oscar nominee, Reynolds appeared in more than 50 movies. She is best remembered for playing alongside Gene Kelly and Donald O’Conner in 1952’s Singin’ in the Rain. The joyful film is typically cited as the greatest movie musical of all-time. Other big-screen credits included The Unsinkable Molly Brown and How the West Was Won. She played the title role in the Albert Brooks comedy Mother and was unrecognizable as Liberace’s mother in the acclaimed HBO biopic Behind the Candelabra. She once knocked Elvis Presley from the top of the charts, earned Tony and Emmy nods, won a lifetime achievement award from the Screen Actors Guild, as well as an honorary Academy Award.


Reynolds’ best role might have been that of survivor. “I’ll keep singing and dancing until I’m too old to stand up,” she said.
Posted by anim8trix at 12:00 AM