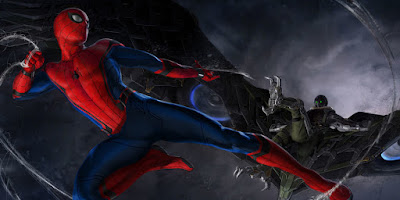 Spider-Man: Homecoming
Tom Holland      Robert Downey Jr.      Zendaya
[Source: blastr] Directed by Jon Watts (Cop Car), the Marvel/Sony superhero movie will skip the whole origin story (thank you!) and pick up right where we left off at the end of Captain America: Civil War. After the epic airport showdown in Germany where the web-slinger rubbed elbows with Earth’s Mightiest Heroes, the kid from Queens, Peter Parker (Tom Holland), returns to the typical life of a normal teenager: going to high school and trying to get the girl. The new Marvel film will also introduce Spidey comic book villains the Vulture (Michael Keaton), Shocker (Bokeem Woodbine) and Tinkerer (Michael Chernus) for the first time on screen.

Some of my favorite stuff? Bank robbing Fake Avengers! Tony Stark! Shocker! Vulture! Oh, my! And yes, Vulture sounds like a downright terrifying villain. There’s also a scene at the end of both trailers (which both feature new footage between them) that harks back to Peter stopping a speeding train in Sam Raimi’s Spider-Man 2. Instead he's doing it with a ferry. There's also a lot of humor and heart in the two trailers below, and I can't wait too see what's in store.

A young Peter Parker/Spider-Man (Tom Holland), who made his sensational debut in Captain America: Civil War, begins to navigate his newfound identity as the web-slinging super hero in Spider-Man: Homecoming.  Thrilled by his experience with the Avengers, Peter returns home, where he lives with his Aunt May (Marisa Tomei), under the watchful eye of his new mentor Tony Stark (Robert Downey, Jr.). Peter tries to fall back into his normal daily routine – distracted by thoughts of proving himself to be more than just your friendly neighborhood Spider-Man – but when the Vulture (Michael Keaton) emerges as a new villain, everything that Peter holds most important will be threatened.

Spider-Man: Homecoming will spin a web in movie theaters on July 7, 2017.