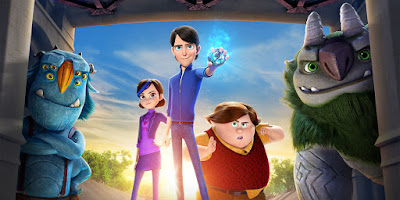 T  R  O  L  L  H  U  N  T  E  R  S
“For the glory of Merlin, daylight is mine to command.” We’re only two days away from the hotly anticipated premiere of Guillermo del Toro’s Netflix series Trollhunters and to whet our appetite for the magical offering, a new clip has been released.

In the clip below, Jim raises an ancient mystical amulet and reads the incantation (see above) to become a Trollhunter, a defender of the creatures that live hidden beneath the streets of the town of Arcadia. The sequence looks absolutely gorgeous (it's DreamWorks after all) and there’s even a fun How to Train Your Dragon Easter egg thrown in for good measure. Like Jim says: “This is so freaking cool!” The 23-episode first season of Trollhunters will drop on Netflix on Dec. 23.

When ordinary teenager Jim Lake Jr. stumbles upon a mystical amulet on his way to school one morning, he inadvertently discovers an extraordinary secret civilization of mighty trolls beneath his small town of Arcadia. Strong-willed and seeking adventure but wholly unprepared for the responsibilities thrust upon him, Jim is forced to take on the exalted mantle of Trollhunter, sworn to protect the good trolls from powerful enemies bent on revenge. The first human ever to hold the honor, Jim abruptly goes from fighting his way through the daily mayhem of high school to joining a war that has raged for centuries, a conflict that now threatens all of mankind and troll-kind alike.

Accompanied by his closest human friends and a few key troll allies, the courageous fifteen-year-old must plunge headlong into a fantastical world of astonishing creatures, glorious cities, and fierce enemies desperate to destroy him. Suddenly destined to play a crucial role in an ancient battle of good and evil with stakes that couldn’t be higher, Jim is determined to save the world — right after gym class. DreamWorks’ Trollhunters is a heroic tale that uncoils with ambitious, complex storytelling and stunning visuals that raise the bar for animated series, creating an event series that will thrill the entire family.
Posted by anim8trix at 12:00 AM