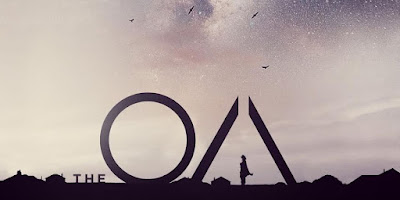 THE OA - Netflix Original Series
[Source: blastr] Out of nowhere (almost) comes a new show from the streaming service that seems more than a little otherworldly.

In The OA, a new eight-part series debuting on Netflix this Friday (Dec. 16), Brit Marling plays a young woman named Prairie Johnson who went missing for seven years. When she finally returns, it's obvious that something has changed: Prairie was blind when she vanished and now can see.

Not only is her sight restored, but she apparently remembers everything that happened to her while she was gone -- only she refuses to tell her parents or the authorities anything about it.

Marling, who has long staked out a spot as one of independent film's most interesting actresses, is collaborating on The OA with her frequent filmmaking partner Zal Batmanglij, who directed her in Sound of My Voice and The East (the pair co-wrote both as well). Both films were atmospheric and mysterious, while Sound of My Voice danced around the edges of science fiction -- a genre Marling also explored in 2011's Another Earth and 2014's I, Origins, both directed by Mike Cahill.

Marling and Batmanglij reportedly co-wrote all eight episodes of The OA, and the show certainly looks as enigmatic and unsettling as their earlier work in the genre. The cast also includes Scott Wilson (The Walking Dead), Phyllis Smith (The Office), Jason Isaacs (Fury), Alice Krige (Star Trek: First Contact), Brendan Meyer (The Guest) and others.

As usual, all eight episodes will be available at once for binge viewing. The OA was actually announced last year but nothing more was heard of it until now, making the show's arrival and trailer very pleasant surprises (there also an Instagram account for the series that may provide more clues about the story).