Pixar goes to the Land of the Dead 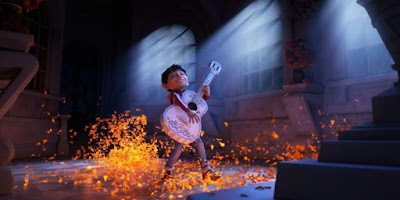 Next Pixar movie, Coco is about a
magic guitar that opens a door to the
Land of the Dead
[Source: blastr] Pixar is usually at its best when playing with a premise a bit outside the box, and Coco certainly seems to fit the bill.

The studio has revealed the first photo from the film, which focuses on a young boy named Miguel (Anthony Gonzalez) who acquires the guitar of legendary musician Ernesto de la Cruz (Benjamin Bratt). Miguel’s family has banned music, but he uses the magic guitar to visit the Land of the Dead in a search for de la Cruz. The story looks to be steeped in real-life culture, the pressure of which is not lost on director Lee Unkrich (Toy Story 3). He told Entertainment Weekly:

“The day John Lasseter gave the thumbs up for this movie, I immediately felt this huge weight drop onto my shoulders because I knew that we were doing something different than we had ever made at the studio and that for the first time, we were going to have this enormous responsibility to do right by this culture and not lapse into stereotype or cliché.”